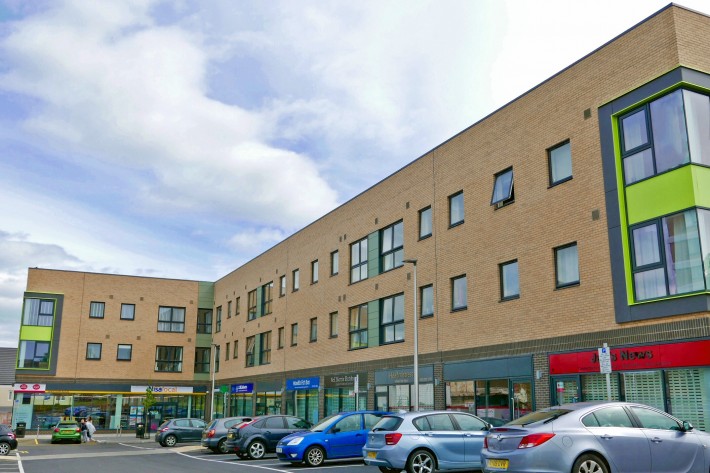 The Maelfa Regeneration Scheme is a multi-million pound project to transform the area into a new, vibrant heart for the Llanedeyrn community. The scheme was made up of two elements that were progressed in tandem:

1. Redevelopment of the site of the former Maelfa Shopping Centre

The former Maelfa Shopping Centre was built in the 1970’s and for many years provided an important community and shopping facility for the Llanedeyrn and the surrounding residential areas. Over time, and with changing shopping habits, it became difficult to let the shop units and most lay empty for many years. The centre became dilapidated in parts, resulting in an extremely poor shopping environment which discouraged people from using it – to the detriment of few retailers who still remained.

To address the situation, Cardiff Council instigated a redevelopment agreement in partnership with Cardiff Community Housing Association (CCHA). The demolition of the former Maelfa Shopping Centre created the space for the delivery of:

• Nine new shop units, which will be let and managed on commercial terms by Cardiff Council;

CCHA acted as the developer in a phased programme of works which began in 2017 and ended in 2020.

Maelfa House, a high rise residential block of 45 flats, was constructed with the Maelfa Shopping Centre wrapped around its base. To remedy structural changes made necessary by the demolition of the shopping centre and to make improvements to the external aesthetics in keeping with the new development going on around it, an extensive external refurbishment was necessary. The project works were carried out between November 2017 and July 2019 and included:

• Cleaning the external brickwork and other aesthetic improvements

• New windows throughout the building

• Refurbishment of existing balconies, including the addition of coloured glass screens

The ground floor was remodelled to provide a new, level access front entrance, the creation of a communal lounge for residents of the block, and a shop unit which has been occupied by the local charity, Churches Together.

For further information on both the Maelfa Shopping Centre and Ty Maelfa, please contact John Holloman at JHolloman@cardiff.gov.uk or 07814 236941.